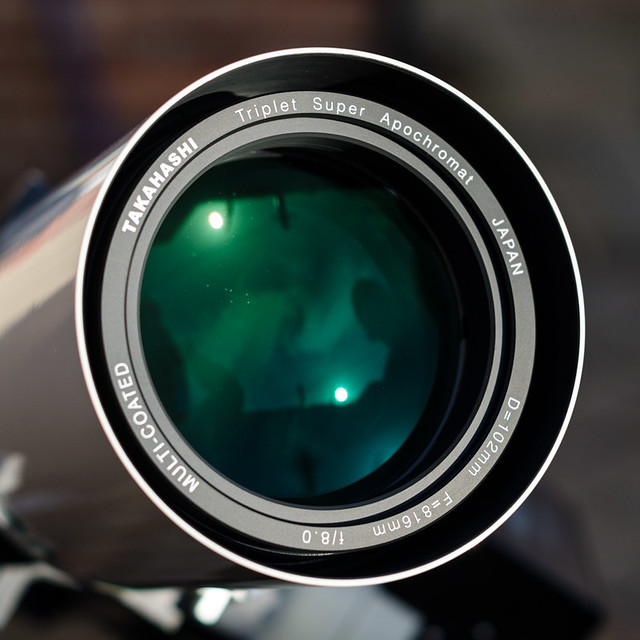 After enjoying owning a 150mm refractor telescope for a year, I decided I wanted to upgrade.

One of the reasons was the optics, I wanted to reduce the amount of chromatic aberration present, I also wanted to have a better focuser. The focuser was a real source of frustration with it constantly causing the view to shift while focussing. I didn’t want to spend a great deal of money on a new focuser when I wasn’t happy with the overall telescope anyway.

In optics, chromatic aberration (CA, also called achromatism, chromatic distortion, and spherochromatism) is a type of distortion in which there is a failure of a lens to focus all colour’s to the same convergence point.

I didn’t want to get a Catadioptric style telescopes or a large reflector due to the size and also the maintenance aspects of keeping the various mirrors and lenses in alignment, not to mention the size and weight. To put it simply, I wanted a a telescope that I could take outside (without a crane) and observe that was also low maintenance.

I did a lot of research other contenders for me were the APM 115mm refractor and the Williams Optics 102mm refractor. What drew me to the Takahashi TSA 102s was there were a lots of really good reviews available and Takahashi are also renowned for using good quality optics. I believe the lens cell is manufactured my Cannon.

At the same time I also decided to upgrade my mount. I have my 150mm refractor mounted on a SkyWatcher EQ5 mount. While this was adequate when I started I feel I have outgrown it somewhat. It is not a driven mount so I wanted something with a drive system to keep the stars centered in the view, and I also wanted something with a goto capability.

I finally decided, after much research, to purchase a Takahashi TSA 102s 102mm Triplet refractor with a 3 inch Starlight Instruments feathertouch focuser, along with an iOptron IEQ45 mount.

Here they are together in all their glory:

Detail of the iOptron IEQ45 mount and controller:

All I need now is a clear night to try them out!

A few night later the sky was clear. At sunset I could see Venus and Mars setting, it was too late to get the mount and telescope setup to look at Mars or Venus, but I did manage to get some nice views with binoculars.

Setup was really easy, align the scope roughly North, then use the polar alignment feature on the hand controller. A clock face is shown on the controller of the direction that you need to align the telescope to. You simply have to rotate the adjustment knobs on the mount to get Polaris aligned in the illuminated reticle.

Well, only Jupiter was visible, but as usual it was a magnificent sight, it was a joy to have the great planet automatically tracked and centered in the eyepiece. I could make out some lovely detail in the cloud bands.

My knowledge of deep sky is not amazing, but I did manage to get great views of Plaides, Orion Nebula, Andromeda Galaxy. Beehive cluster.

Oh, I was also lucky enough to see the comet C/2014 Q2, otherwise know as Lovejoy!

The Takahashi TSA 102S is built magnificently, the finish is flawless, the lens is superb, the focuser doesn’t move the view out of alignment and is super smooth to use. The stars are crystal clear and pin sharp!

Well now my main optics and mount are in order I need some proper eyepieces. I only have the stock eyepieces that came with my 150mm: a 10mm and 25mm plössl. I seriously need to upgrade them pronto. I have my eye on nice TeleVue Delos eyepiece.

Now that I have a stable mount I want to try some astrophotography, it would of been great showing you what I saw rather than just describing it.

Powered by Hugo with theme Dream.

Hi, my name is Dave Thomas and Im a software engineer from the Uk. I work primarily in F# but also like to tinker with pretty much any interesting language. Im drawn to more functional languages like F#, Swift and Rust.

Have questions or suggestions? Feel free to ask me on Twitter.